Myrtle and Pearl on a Hot Tin Roof

Posted by: Tracy Carr Categories: Williams
Comments Off on Myrtle and Pearl on a Hot Tin Roof Myrtle: Though I have read The Glass Menagerie many times, and A Streetcar Named Desire a few, I’d never read Cat on a Hot Tin Roof (and I keep typing roof as “toof,” which I find hilarious). Once I started, I realized I snoozed through a Broadway production of it on a drama club trip to New York in 1990–Kathleen Turner played Maggie and Charles Durning was Big Daddy. I remember nothing! So it was interesting to finally read the play.

What were your initial thoughts about it?

Pearl: Well, I thought I’d never read it before, but once I started reading it I realized we actually read some parts of it in my drama class in high school. I will say that most of it went over my head at the time. So this was pretty much like my first time to read it. I liked it at the beginning. Maggie has the BEST insults for people. Like calling Mae’s kids no-neck monsters. I laughed every time I read it. And then when she called Mae a “monster of fertility”. Haha! I just found it hilarious. But eventually the play got more and more heavy and I was less entertained and more on edge. The way they talk to each other just made me so nervous!

Myrtle: That was pretty much my reaction too! I’d heard about “Maggie the Cat” and was interested in seeing how she came across, and she does have the best insults. I know plays have limitations, but it seemed to take a REALLY long time to get to the meat of what’s wrong between Brick and Maggie. Then Act II just nearly caused me to need medical attention. All that ugliness and yelling and Big Daddy’s insults and the way he talked to and about Big Mama. It’s interesting that it wasn’t facing death that made him let it all hang out, it was that he thought he wasn’t dying after all that he decided “welp, now’s the time to let you know that you guys suck, especially you, my devoted wife of 40 years.”

Pearl: Yes, the way Big Daddy talked to Big Momma (I have her shortened to BM in my notes which makes me laugh) made me so sad. And the same with the way Brick talked to Maggie. I just tried to imagine how I would feel in that situation. Like you’ve been with someone for 40 years and he’s suddenly like, “You’re fat and horrible and annoying and you talk too much!” I just wanted them to be polite! Or for him to at least throw Big Mama a bone once in awhile.

Myrtle: Maybe it’s that I didn’t come from a yelling house but if I’d married into this family I would have to pretend to have a migraine pretty much every hour of the day. One thing I thought was interesting about Gooper and Mae is just how much we are supposed to hate them. First, the guy’s name is GOOPER. Gooper is never going to be the hero of anything. Even if you love children, theirs sound awful and there are so many of them. Was it Maggie who asked them why they gave their kids dog names? (Good one, Maggie!) You get the idea
Pearl: Yes! Ol’ Gooper the pooper.  Tennessee Williams really did do a good job of making you hate him and Mae. I HATED them. I don’t know how Maggie and Mae didn’t come to blows or at least chase each other with brooms like in Crimes of the Heart.

Myrtle: Mae and Chick would be best friends! Hold on, Pearl, I need to go write a paper about “Chick and Mae as Procreating Monsters in Southern Drama.”

Pearl: Haha! That’s true! Why do the awful women in both plays have awful children? I guess there’s nothing worse than the thought of someone passing all of their most horrible attributes on to the next generation.

Myrtle: I wonder if it’s a statement in general about mothers, or women’s roles or something. I’m not deep enough to say what that statement is. I just think it MIGHT be a statement. #statementdetector

Pearl: It probably is. I’ll google us up a thesis on it later.

Myrtle: Haha! Thanks, librarian. Unlike Crimes of the Heart, this play had a ton of stage direction. I almost wonder if Williams would’ve rather written this as a short story or novel because he had a lot to say that just couldn’t be shown to the audience. There’s a point where he just starts talking to the reader or director (but not the audience) about what his goals are with the play. I liked the way he put it. It was something like “the bird I hope to catch in the net of this play…” Tell us your hopes and dreams in the stage directions, why don’t you!

Pearl: I wondered that, too. I wondered what made him decide to become a playwright instead of a novelist. Novels seem easier. I’d definitely go the novel route. Haha!

Myrtle: The Glass Menagerie was a short story first called “Portrait of a Girl in Glass.” I wonder if the limitations of a play were easier for him–otherwise you can get carried away with description and switching from scene to scene, whereas in a play you have to commit to where the action happens because in the back of your mind, you’re imagining the cost and logistics of striking the set (#dramaclub) and props, etc.

Pearl: And how does the actress show the audience that she ALMOST stopped being fat? Come on, Tennessee!

Myrtle: What did you think of the Southern-ness of the play? The dialogue and the setting?

Pearl: Well, the setting was obviously very Southern. What’s more Southern than a big ol’ house with a bunch of land around it? The dialogue was hit or miss for me. My grandmother does say “Well, I swan” so there’s that, but some of it took me a moment or two to figure out. The phonetic spellings messed me up a few times and you just don’t hear accents like that much anymore.

Myrtle: Yeah, they weren’t consistent. I did write down my favorite phonetic spelling of a word, which Big Mama says three or four times. It does capture the essence of how old ladies (including my grandmother) say this word. Are you ready for it?

I don’t know why I think that’s so funny. But of all the words to choose to phonetically spell, HANH made the cut!

Pearl: Haha! That one is really good! I had to google what a “lech” was. When Maggie says Big Daddy has a “lech” for her I was like “A what now?”

Myrtle: I’ve never heard that, but I assumed it was short for “lecherous feelings” or something?

Myrtle: What did you think of Brick? It was interesting that the play is set up for him to be the hero, but he fails in literally every way a traditional Southern man is supposed to behave. He’s an alcoholic, he doesn’t have a job (and can’t provide for his family), he doesn’t have children, and his bff was apparently in love with him.

Pearl: Have you ever seen Napoleon Dynamite? Brick reminded me of Uncle Rico. Still living in the past in those high school football glory days. I didn’t like Brick. I didn’t like anyone! Brick was a loser. Plain and simple. He seems spoiled and he’s surrounded by people who refuse to acknowledge how serious his problems are (except horrible Gooper and Mae, but they don’t care about him). Myrtle: I guess I didn’t like anyone, either, except Maggie. And my relationship with her is tenuous because I would hate her guts in real life.

Here’s a question (that I stole from the internet while looking for discussion questions): if you had to cast this as a Hollywood movie, who would you cast for Maggie, Brick, Big Daddy, Big Mama, Mae, and Gooper?

Pearl: Hmmm. Let me think for a minute. Brick would be Matthew McConaughey, for sure. Maggie could be Reese Witherspoon, maybe. Big Daddy would be John Goodman. Kathy Bates as Big Mama. Michelle Trachtenberg as Mae and Matthew Morrison as Gooper. 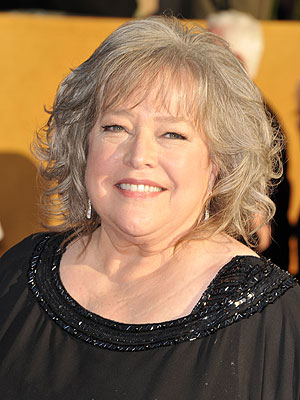 Myrtle: I’m stealing John Goodman from you for sure. I’m going to cast Margo Martindale as Big Mama. Bradley Cooper as Brick, Emma Stone as Maggie, Connie Britton as Mae, and Jason Bateman as Gooper. Connie Britton and Emma Stone could switch and it would be just as good! However, it’s probably for the best that I don’t quit my day job and try to be a casting director.

Pearl: I’m not good at the casting thing either! I pick people who have played similar roles. I thought about Emma Stone, but I like her so much I think she’s just too good to be Maggie. She’d probably be really good though.

Myrtle: Back to the play–so there is an original ending, and then Elia Kazan twisted Williams’ arm and he wrote an alternate ending. Which one did you prefer and why?

Pearl: I liked the second one best. There is a little bit of hope at the end for Brick and Maggie. The original ending just left you with nothing. It was so sad. In the original one she tells Brick she really loves him and he goes, “Wouldn’t it be funny if that were true?” That’s sad, Myrtle!

Myrtle: It is sad. Maybe I preferred the first one because I read the introduction that Williams wrote to the second one, and he was so MAN I WISH I HADN’T WRITTEN THIS that I was predisposed not to like it. But it is definitely more hopeful and tender without being a total departure from the original.

Pearl: This has nothing to do with the ending really, but why do you think they lied to Big Mama and Big Daddy about the cancer at first?

Myrtle: Maybe so they could get their ducks in a row about the will, since Gooper was all “PS, Big Daddy has cancer real bad, now look at these documents I have handily right here.” Gooper cannot WAIT for Big Daddy to kick the bucket. His parents have doted on Brick his whole life and Gooper thinks he will FINALLY get a reward. (I’d be pissed if my parents called my brother Brick and me Gooper, too.) That was a long way of saying “Gooper finally has control for once in his life.”

Pearl: Haha! Me too. Big Mama also refers to Brick as her “only son.” Ouch. I had no real thoughts on why they lied at first about the cancer. I wondered through the whole play, but couldn’t really see a reason for it.

Myrtle: I think the reason was a dramatic device: so Brick could say something devastating and essentially kill his father. Then Maggie messes that up with her fake baby news.